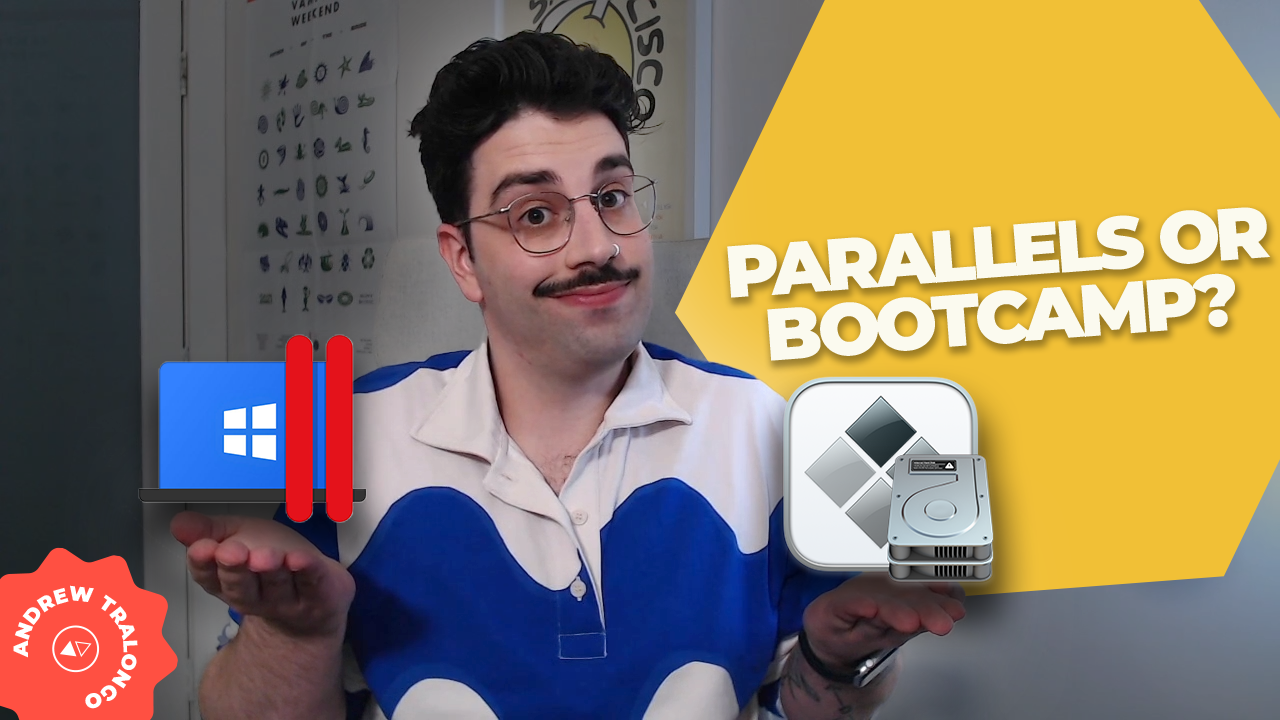 Streaming on Mac has come a long way, and there is way more that you can do compared to a mere few years ago, but nevertheless, Windows dominates the streaming market. When it comes to chatbots, VoiceMod and numerous other features and functions, Windows just has the leg up.

So, if you’re like me and want to stream with Windows on your Mac machines, there’s two ways to do it : Parallels and Boot Camp. I’ve tried both, so let’s see how they stack up!

What’s the difference between Parallels and Bootcamp?

So first let’s quickly cover what the differences between the two are.

Parallels runs Windows as a Virtual Machine within your Mac – so at the end of the day, you have Windows within a window in your Mac.

Since it is an application however, you have to buy Parallels, as well as a Windows licence.

Bootcamp on the other hand, partitions, or divides your hard drive, and then runs Windows through your Mac as if it was any other piece of hardware – this means that to swap between Mac and Windows you have to restart your machine.

To set this up however, you can download a free copy of Windows from the Microsoft Store and then buy a Windows licence separately whenever you are ready. You can save a bit more money this way compared to Parallels as with Parallels you need to buy the application licence as well.

Additionally for the context of my setup, I use a 2019 MacBook Pro. I basically got the best model with less storage – I got the one with 500GB and the one above came with 1TB.

I first tried Parallels because I could seamlessly switch between Mac and windows without any restarts. So for instance, create something in Illustrator and then simply drag it over to Windows to insert it into my OBS.

Yes, I could download all the Adobe programs on Windows and run it straight through there, but I am much more comfortable using it through Mac OS.

I had unfortunately already tried Parallels on my Mac, using up the free trial, so I had to purchase it. It was very easy to set up, very user friendly as most applications on Mac, and started with setting up basics in Mix it Up and OBS, getting everything packaged up on my Mac and copying it over to Windows.

And I’ll give OBS credit here – the Export/Import tools are super handy and made the process quick and easy!

So while I had no issues in getting that set up and migrated, the last thing I did (which really should have been the first thing) was plug in all the microphones, webcams and capture equipment.

Elgato’s capture card on the other hand is where the roadblock happened.

Parallels had issues in transmitting data through the USB ports for the Elgato capture card. So what was happening was that in OBS, the game capture and audio would work for a second and then stop, basically making it unusable.

I tried to turn on all the ‘Pro’ modes for Parallels, letting it use as much juice as possible rather than running it in ‘Battery Power Saving’ mode, but it didn’t fix the issue.

As I mentioned earlier though, I had to purchase Parallels – BUT they do advertise a 30 day money back guarantee, which is always a bit difficult at the best of times. But I’ll give credit where credit is due! Once I did connect with one of their support team members, I did get the refund without too much hassle.

So since Parallels is out of the way, I next tired Bootcamp.

I was a bit hesitant with Bootcamp at first. I thought it was going to be pretty difficult to get it all setup, but it wasn’t really too bad at all. Since it’s a software in Mac, its again very user friendly and a guided experience.

Once I got Windows all set up, just running off the free copy till I was settled in, setting everything up didn’t have any issues. However, I have run into a few issues a few months into using Bootcamp.

First, a few streams in I was having an issue when the Wifi would consistently drop out every 10 minutes or so. On Mac, my Wifi would never drop out.

After a bit of Googling and finding out that it was a semi-common issue. There was a common fix for it, but for some reason, I couldn’t find that dropdown in my driver settings, it just wasn’t there.

To fix it funnily enough, I actually on-purpose installed and then uninstalled an incorrect driver just to get a setting. And now it works! If someone ran into the same issue, I couldn’t tell you what the actual solution was, but that’s the jist of it.

If I had Ethernet, I don’t think I would have any issue, but with the layout of our living space, it’s not really possible to get that wiring coming through to the office.

The USB speed transmission issue which was occurring on Parallels wasn’t present on Bootcamp, which makes me think that it’s a Parallels issue rather than a “my computer isn’t powerful enough” issue.

I did run into another issue – one day I turned it on and I was stuck on a blue screen. Even after restarting it, it was still stuck on the same blue screen. Again after some good old Dr.Google, I found out that a bluetooth driver was causing the issue. To fix it, I restarted the computer in ‘Network Safe Mode’ (I think that’s what it’s called) where all the Wi-Fi and Bluetooth cards are disabled, then temporarily disabled the Bluetooth driver.

It isn’t too much of an issue to be honest, everything is either wired or USB dongle connected, like my Logitech mouse and headphones, but it could be for some of you out there.

Apart from that, everything else has seemed to work just fine – it’s all just the basic learning curves of using VoiceMeeter, OBS, Mix It Up and all in the best way possible. Especially VoiceMeeter because, god, that program is difficult to use.

To combat the easy switching of OSs with Parallels, I heavily use Google Drive now as a virtual hard drive/cloud solution.

So if you were to ask me “Which should I use – Parallels or Bootcamp?” I would say Bootcamp BUT in 2022 we have a new issue: All the new Macs with Apple chips can’t set up bootcamp.

Only the Macs with Intel chips can set up and run BootCamp. And my model of MacBook Pro, the 2019 MacBook Pro, are the last MacBook Pro’s to have Intel chips. All the new laptops and iMacs are filled with Apple Chips.

So hopefully Parallels can solve this issue, otherwise streaming with Windows using Mac hardware is going to very quickly become a solution of the past, or we are going to have to go shopping on eBay to find this model of Mac.